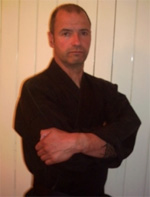 I first started Martial Arts in 1982, when I studied Wado Ryu Karate in Brighton. I left in July 1984 when I went abroad to work. On my return in 1985 I studied the art of Jiu-jitsu under Sensei Steve Dodd with Jiu-jitsu International and was graded by Professor Morris. When Sensei Steve Dodd left for New Zealand I decided to continue to study a different style of Jiu-jitsu. I trained under Sensei John Meek who took me from novice to Dan grade. I attended courses run by Professor Morris and Professor Clark as well as other Jiu-jitsu instructors. When I received my 1st Dan in 1992 I was asked to run a club jointly at the Brighton Judo Club which I did for 2 years. In 1994 I was asked to start a club at the Lancing Manor Sport Centre which I ran successfully for 12 years as the Senior Instructor. I am now happy to be part of Sensei Chris Kent’s Martial Arts Centres.