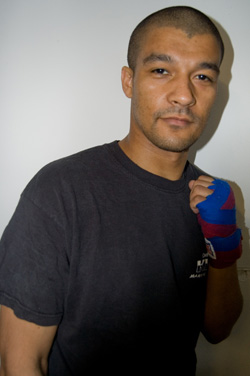 Clifton started studying martial arts in 1984.  He trained in Judo for two years, then went onto boxing training, and then onto Free Style Martial Arts where he competed in both independent events and in the CIMAC National Super League.

In March 2004 he started Kickboxing at London Kicks with former Instructor Mike Furse.  In 2006 Mike Furse re-located to Cardiff and Clifton started co – instructing with Kevin Hampden. Though Clifton took some time out from this role in 2007/08 he is back co – running the London Kicks Club with Instructor Donna Torrance.

He continues his training under Chief Instructor Chris Kent and Instructor Tiffany Williams at the main Brighton Kickboxing Dojo. He is also a Black Belt in Feulueng Freestyle and a Brown Belt in Sun Kune Do

Clifton fights on the semi-contact circuit and is also an ISKA qualified judge.

He is First Aid Qualified.