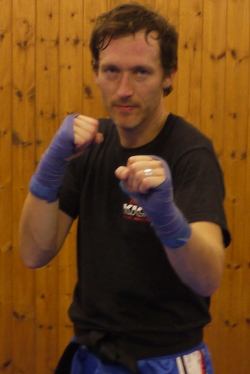 Stitch first started training at Kicks in 1998 under Instructors Jim Caldecourt and Antony Hogbin.  As a Junior Stitch studied Kung Fu, and as an adolescent he trained in mixed martial arts.

From 1998 – 2001 Stitch trained with Kicks and got up to Blue Belt. An injury and a move from Brighton forced Stitch to take a considerable amount of time out from training (2001 – 2008).
At the start of 2009 Stitch returned to training and studying under Chief Instructor Chris Kent.  From his return, Stitch’s intention was to work towards coaching others in order to help them experience the benefits of a sport he feels so passionately about.  Stitch had previously coached and run the admin side for a Football team, and knew he had the skills to transfer this to setting up a Kicks Kickboxing Club in Eastbourne.

Kicks Eastbourne has now been established since 2010, and Stitch has a committed and steadily growing group of both Junior and Senior Students training under him right through from beginners to Black Belts.

His commitment is even more evident when you know that this is alongside having established the ever growing Slims Pro Sportswear Brand (Slimssportswear.co.uk) ; and also being the father of two young children.