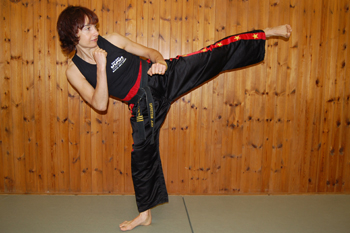 Kickboxing originated in the mid-seventies in America under the guidance of the PKA (Professional Karate Association). It was initiated as a result of the frustration felt by many martial artists with the Karate Tournament Circuit. Initially known as Full Contact Karate with most of the original champions coming from a Karate background; Bill “Superfoot” Wallace, Joe Lewes, Benny “The Jet” Ugiduez it increasingly came to be known as kickboxing. Though some saw it as detrimental to traditional karate as it combined a mixture of styles and disciplines, others felt it opened the door to a more practical form of fighting.

Kickboxing came to the United Kingdom in the late 1970s and established itself as a demanding and exciting sport. Though martial arts are usually thought of in terms of a style or a system, kickboxing is an eclectic martial art that gives credit to most of the fighting arts in its application. The hand techniques of the boxer are combined with the kicks of many different martial arts from the orient.