Kicks Fighters had a good day and evening at Bracknell Leisure Centre. At the daytime event Peter Muffett and George Milsom both won their 2 x 1.5 Minute Semi Contact Bouts.

The Full Contact Evening Show saw Kicks fighter Ibrahim Hedari (Age 17) fighting his second bout against Luke Tello (Streetwise). This fight over 3 x 1.5 minutes rounds saw a strong first round from Hedari who picked Tello off with accurate punches and strong kicks, and was very much in control. In the second round an initial storm from Tello caught Hedari off guard. This resulted in a much closer round with Hedari having to really fight for his ground and taking some heavy shots in the process. The third round started off very even with both fighters giving it their all, but Hedari used his legs and strong side kicks to push his opponent off and to gain an advantage.

Next on was Kicks fighter Lucasz Gromadinski against Mark Fitzgerald (Streetwise). This fight over 3 x 1.5 minute rounds saw a slow start from Gromadinski who initially got caught with a few jabs before warming up, and starting to counter with a short and accurate lead hook and very strong body kicks. The second round saw Gromadinski opening up. Catching Fitzgerald with his hard right he pushed him back with combinations whilst continuing to power his legs into the body, the round finishing with a powerful back leg kick to the head from Gromadinski.

The third round saw Gromadinski out early facing his opponent and taking the centre of the ring. He maintained control of the round, and pushing Fitzgerald back caught him with a further head kick which resulted in an eight count. His opponent survived the count but was unsteady on his feet and a gruelling combination of hurtful punches which he was unable to respond to, followed by another head kick from Gromadinski saw the referee rightly stepping in and stopping the bout.

Kicks fighter Tony Decaux had his debut full contact bout against Kanwar Singh (Streetwise). Singh came out very strong right from the initial bell, and pushed Decaux back with combinations of hands. Decaux kept a tight guard and was catching Singh with single techniques but his opponent was throwing more and walking forward. A better second round from Decaux who though getting pushed back started to get his kicks off to better effect, but was frustrated by his opponent who was initially illegally catching and holding his leg until warned by the referee. The third round saw Decaux regaining his ground more and scoring but the strong and determined Singh continued to push forward and work strong combinations. 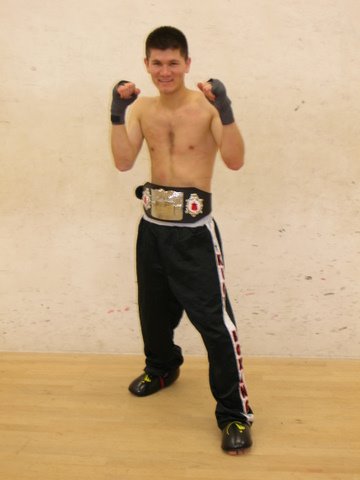 Kicks fighter Sarwar Hamid was due to fight for an Amateur English Lightweight Title against Gary Brenan (Chadwell Gym). Unfortunately his opponent was forced to pull out due to an ankle injury, and Hamid was only notified of this at the venue. In order for Hamid to get an outing in the ring Kicks fighter Simon Sutherland stepped in at short notice and did a demonstration bout over 3 x 1.5 minute rounds.

Hamid was awarded the belt by the promoter and will be fighting for a defence at the earliest possible opportunity.