This was an exceptional display of kickboxing from both camps, and an appreciative audience watched five rounds of evenly matched and paced action in an amateur bout which was worthy of professional status. 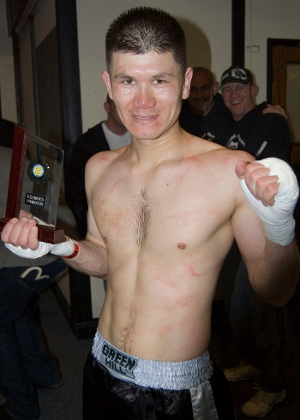 In the first round both fighters tested each other out and the second saw strong kicks and punches from both fighters with little to separate them, but Hamid ended the round with a spinning side kick which hit his opponent flush in the mid section. In the third round Hamid’s confidence had increased, and he used his fluid arsenal of kicks at range, and then sharp hands to catch the Grimsby fighter when he tried to close the distance.  In the third round Tomlinson was trying to dig his strong right in which was countered by Hamid’s left, and Hamid managed to end the round on another spinning jumping kick. In the fourth round both fighters were kicking strongly and more exchanges were thrown, but the round ended on a spinning hook kick to the head from Hamid which sealed the round in his favour. The fifth round saw both fighters come out strongly and both giving it their all, with Hamid continuing to keep up his increased work rate in his second only five round bout. This was a very evenly matched fight which Hamid won on on all three score cards. After the fight Hamid gave due respect to his opponent and the hard fight he bought to the ring.

Trainer Chris Kent said, “Sarwar brought to the ring a maturity in his fight plan previously unseen and fought the best fight of his career against a very worthy opponent. On this performance we feel Sarwar is definitely up with the top rated domestic fighters in his weight category, and we hope will now get the opportunities he deserves to reach his potential.”

The head of WAKO Cris Janson Piers who was at the event was so impressed with Hamid’s kickboxing skills that he has promised a deserved Title Shot for this young man at a future occasion.