Kicks Trainers Shane and Chris Kent took Full Contact Fighters Lucasz Gromadzinski and Sarwar Hamid to Nottingham for the W.A.K.O. British Tournament Championships on Sunday Feb 27th . Both fighters won their preliminary bouts. Lucasz beat Adam Davis, and then went through to the Semi Final. He was up against the experienced, and very well schooled Audi Kinga from Paragon Gym who was WAKO Champion of 2007/2008/2009. Audi Kinga (Paragon Gym) fought on to become the 2011 Champion (For the record he didn’t lose in 2010. He didn’t compete!)

Lucasz received Joint 3rd in the Under 71KG Section.

Sarwar won his initial bout against Ricardo Co(Solent Kickboxing), and then got a by in the semi final. This saw him in the final up against English IKF Champion Daniel Nalijawako (Millenium Gym).

These two had fought in December 2010, and Sarwar had beaten Daniel on a split decision.  Sarwar was determined there would be no uncertainty in any of the judges minds this time, and in what proved to be the fight of the day dominated each round. Daniel, as in their previous fight kept coming forward, and Sarwar effectively countered his attacks. At the end of the round Sarwar caught Daniel with a straight right which knocked him down as the bell went. In the second round a text book left hook to the jaw sent Daniel crashing to the canvas and receiving an 8 count. In the third round Sarwar retained his control of the ring, and of the fight, and won on a unanimous decision. Sarwar Hamid is now the  2011 WAKO Tournament British Champion at Under 64kgs. 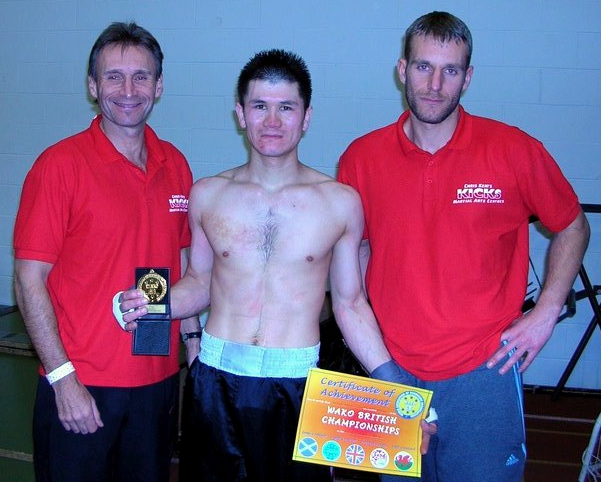 A good start to the year for this young exciting fighter who has so much talent and potential.

Sarwar and Lucasz next fight at The Absolute Adrenalin Prizefighters Show in Bournemouth on March 13th against tough opponents – Jason Wheeler (71kgs) and Mike Brent (64kgs).