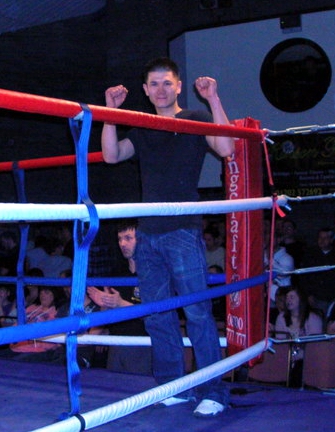 Sarwar Hamid came into the ring fresh from his WAKO British Championship win two weeks ago. From the moment the first bell went, Hamid was in control of the ring and picking Brent off. Half way through the first round Brent was caught flush in the mid section with a spinning side kick which saw him on the floor receiving his first count. Up on his feet Hamid edged and moved, having been given clear instructions by his corner not to finish the fight until later in the rounds. Brent though up, was obviously still in trouble and was knocked to the floor again in what would have resulted in a second count if the bell had not rung at that point.
In the second round Hamid continued to dominate the ring and the pace of the fight, and edged and stalked his opponent, picking him off with painstaking accuracy. Getting Brent on the ropes Hamid proceeded to dismantle him with crisp crunching body shots which saw him bent over and gasping as he received a second count. Returning to longer range Hamid pushed in his strong kicks he is re known for,  and which saw Brent shunted across the ring and catapulted between the lower two ropes.

The third round was much of a repeat of the second, with Brent surviving a further two counts, and the crowd loving this display of top quality kickboxing.

In the fourth round Brent’s corner were making Brent aware his only chance was a knockout. Though aware Brent was still dangerous, Hamid was never in anything but 100% control. Brent was obviously suffering from the amount of damage he had taken over the previous three rounds, and a further kick to the body caused him to crumple up on the floor on his knees receiving another count.  Both Hamid’s corner and the crowd were wondering how much more punishment this very strong young man could take, but a lead leg head kick followed by a straight right and a barrage of punches saw Brent down, and the referee stepping in between the two and stopping the fight. Fourth Round Stoppage for Sarwar Hamid.

In the previous 12 months Sarwar Hamid has shown his increasing maturity and strength on the fight circuit, and now not yet 21, is now seen by many as the top amateur fighter at his weight in the country.