Chris  and Shane Kent travelled up to Birmingham with a small  team of experienced fighters for the Amateur ISKA British Championships. 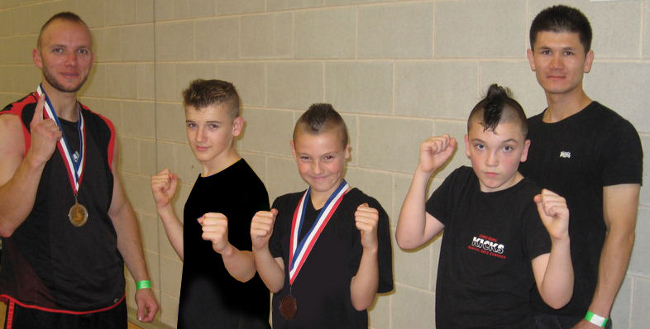 Lucasz Gromadzinski was down to fight in the Male Full Contact Under 71kg Section but due to no fighters in this section had to fight in the Under 75Kg Light Contact Section.
Lucasz had obviously been training to fight for 3 rounds with full contact, rather than one round with light continuous contact, but he came away with a silver meal having beaten  Perdtep Thiara(Shin-Kin) but then losing to Balroop Thiara (Shin-Kin) in the final.

Sarwar Hamid was in the Male Full Contact Under 63.5kg Section, and with only one other fighter in this section Mark Boot (Eclipse Kickboxing) both fighters were straight through to the final.
Sarwar went to work straight away. He caught his opponent with strong body shots, and though Boot came back and caught Sarwar with a cross and an upper cut, Sarwar came back at him and then caught him with a couple of strong head kicks. 10/9 Round to Sarwar.
In the second round Sarwar  caught Boot with a lead leg hook kick, worked on his hands again and then a beautifully executed spinning hook kick from Sarwar left his opponent still on his feet, but in no state to continue. The referee stopped the fight and so TKO in the Second Round for Sarwar and a Gold Medal.