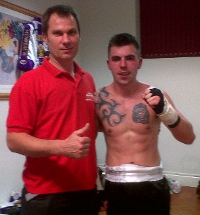 The show sanctioned by WKMA and put on by promoter Nick Brewer of Gym Xtreme was captive to a capacity and appreciative audience.

Kicks First Fighter was James Caldecourt VS. Zack Sheldrick (Dynamic Tiger). This was James Caldecourt’s debut fight and the round started fast with James catching Zach with a front kick to the face. James then kept a tight guard, and showed composure and calm as his opponent came back at him with powerful kicks and strong punches. A couple of spinning kicks by James just fell short of their target, but the last part of the round saw his opponent tiring and James picking his shots, pushing his opponent back, and connecting with an accurate right hand and three hooks which wobbled Sheldrick.
The second round saw James growing in confidence. A hurtful front kick to the body by James was followed up with body punches. A right body hook follow by an accurate and crisp left hook left his opponent gasping for air saw and unable to beat the count.
Second Round TKO for James Caldecourt.

Team Work at its best 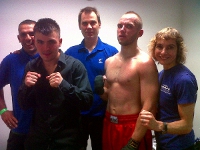 Second Kicks fighter of the night was Lucasz Gromadzinski vs. Jason Giddings (Gym Xtreme).The first round started with both fighters throwing hand combinations. Lucasz caught Jason on several occasions with his lead leg round kick to the body followed by his stiff jab. Lucasz showed good ring craft in this round against a game and keen opponent, and as the round ended connected with a strong explosive uppercut which rocked Jason.
Round two was more even with both fighters exchanging combinations of hands. In round three there was less action but Giddings showed his determination and strength, and though pushed back with a body kick continued to come forward throwing punches at Lucasz. The round finished with Giddings on the ropes as Lucasz threw a strong hand combination.  A majority decision win to Gromadzinski. 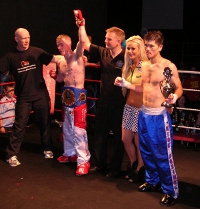 Over in Galway,Ireland Kicks Fighter Sarwar Hamid was unsuccessful in his bid to win the the Vacant Amateur IKF European Title (62.27KG) against Eric Daly (Black Dragons Gym, Galway). These two had met earlier in the year in an electrifying five round battle which saw Sarwar scoring a very convincing win against the very game Irish Lad. At this show the cards turned, and Daly with the full support of a very lively crowd came out from the first bell throwing strong hand and leg combinations. Sarwar was caught off guard and though catching Daly with single shots seemed unable to make use of his footwork and quality ring craft; and as the fight progressed was unable to get into a comfortable rhythm.
Daly won on a unanimous decision and is not the IKF European Champion but we know for sure these two young and very likeable warriors who both promote Kickboxing at its best will meet again in 2012!