Congratulations to all fighters who entered Ringmasters 2012. This Prestigious Thai – Boxing Event which has launched and promoted the careers of many current British Thai Boxing Champions opened its doors for the first time this year to the Semi – Contact Kickboxing Division. 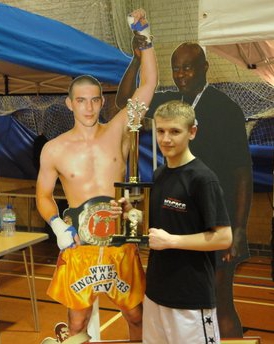 It was a long day for all fighters who arrived at 9am. Due to the way the divisions had been worked out none of our fighters were on before 5pm, but once their division was called, there was no breaks between the fights.

Our seniors Odile Rapoport and Chris Friis were unfortunate in that both got knocked out of their divisions in the first rounds, so it was down to our Juniors:

Jamie Brown was back in the ring again after his Junior Championship Win in Birmingham last week.  Entered in the Under 12/ Under 45 Kg Division he gave it his all throughout the three rounds; but didn’t take the win on this occasion.

Our two Juniors Robert and George Kenly both worked very hard to earn their places in the final. George had two tricky fights. His second fight against a lad several years older and about half a foot taller, but undaunted he took the fight to his opponent, and took the decision on this closely fought bout.  Robert had a very tough first fight, but used his ring work, and sharp hands and legs to win all three rounds convincingly. It was a shame then that the two brothers had to face each other in the final, and that there could only be one winner.  Congratulations to Robert for being the 2012 Junior Ringmasters Champion at Under 50Kg, and to George for being a very worthy contender, and giving him a tough battle through-out this bout.