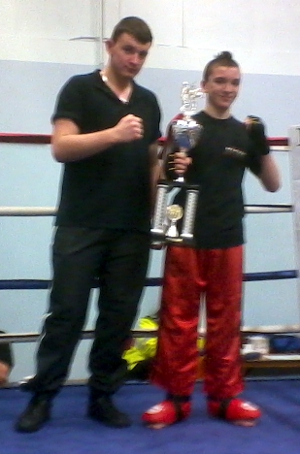 Great day at the First IKF English Open Junior Championships organized by Colin Payne of TKO, and sponsored by Kicks Dan Knight who is the face behind “Sidekick,” and manufacturer of our high quality “Kicks” products.

Fantastic Standard of Fights throughout the day and despite the thick snow falling outside the venue; the whole event ran smoothly from start to finish. Kicks Fighters Robert, George and Jamie all trained really hard for this and all gave 100% on the day.

Boys under 45Kgs (10 – 13 Years)
Jamie Brown is like a Duracell battery that never runs out. He won his first fight against Luke Dennard (DFC), which took him through to the semi final against Luke Dean (Gilmores) who he lost to. Jamie gave 100% in both fights, and continues to improve. As one of the younger ones in his category
we look forward to this category next year!

Male Juniors under 50Kgs (14 – 17 Years)
Robert Kenly was in the final in the 13 – 17yrs (Under 50Kgs) against Connar White (Saxon Gym). This was a great final between two very tough and skilled young men, and which Connar White won. This would be a good re-match in the Full Contact Arena further down the line.