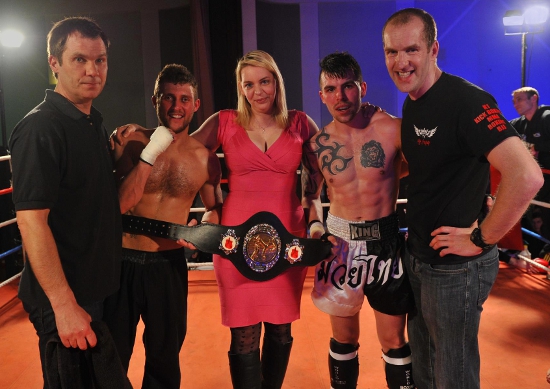 This five round bout between local fighters James Caldecourt (Kicks) and Jordan Khon (Gym Xtreme) was the penultimate fight at the Charmadean Centre, Worthing. Both young men brought large support to the ring, and as the fight progressed the crowd were very vocal in shouting and encouraging their fighter on. The first round had a strong start from James, and he was on target with his lead leg round kick and his accurate jab as he looked to dig his right cross in. Jordan used good ringwork to keep out of trouble, and was also looking to score with his straight kicks and hands. The second and third round saw more of the same, and Jordan making  use of his side kick both to score and to keep James at range. James continued to try to shut the ring down, and made good use of body shots but Jordan was effective in tying up his opponent and the referee being forced to step in and break them up.

A nice range of kicks were thrown in the middle rounds, and Jordan’s trade mark spinning side kick answered by James with one of his own. Excitement in the crowd continued to mount. In the fourth and fifth round both fighters showed they’d put the ground work in and trained hard to be able to sustain their high work rate.
James was always the aggressor and pushing forward, but Jordan was tricky to hit cleanly and was still managing to score with shots of his own whilst being pushed back. The bell went with both corners confident their fighter had won.
The draw when given was a surprise to both teams, but does pave the way for an exciting rematch in the future.