It was good to have both Kicks Brighton and Kicks Eastbourne at this BLCC enjoyable event run by Colin Payne in Chatham, Kent. 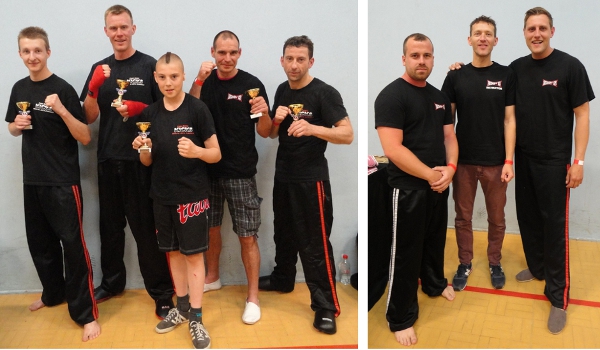 It was a quieter event with some of the larger clubs missing so everyone had fought by 2pm, and we were back home in time to watch the end of the singles and a triumphant win to Murray!
On this occasion the Kenly brothers unfortunately weren’t matched, so Jamie Brown was our sole Junior fighter and put on a superb fight against Jay Huntley from TKO. Jamie’s growing skills were in evidence as well as his increasing confidence, and he comfortably won this bout having lost to J. Huntley on the previous two occasions.   Stitch Sayers (Eastbourne Kicks) brought his first two fighters Martyn B. and David C to this event, and Eastbourne came away with a win and a loss, and more importantly both of them having enjoyed the experience and keen to do it again.
Small mention re the decision around Tomas Kovaricek who we felt had pushed forward, and scored more and had this fight in the bag, but with all these events you take the wins with the draws and losses. Results as follows: