On September 13th Kicks Fighter Jamie Brown took part in the K1 World Open Amateur Championships held as part of the Strength and Combat Show at the London Soccerdrome. This is the first event of it’s kind to be held in this country with K1 Legends Ernesto Hoost and Peter Aerts in attendance, and an estimated audience of over 2,000 people.  The fights were 3 x 1 Minute Rounds with 30 Second Break. Jamie fought Abdo Toma from Italy in the semi final, and Linus Klevenskogfrom Sweden in the final. Jamie dominated both fights. 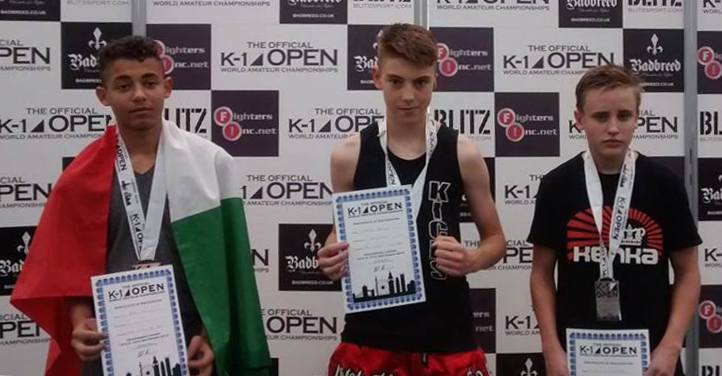 His timing and variation of techniques – going from strong leg kicks to accurate placement of punches and good use of the side kick made him stand apart from his opponents. The unified decisions of all three judges saw Jamie Brown receiving the accolade of K1 World Open Amateur Champion in the 13 – 14 Years (Under 54Kgs Section). Jamie is looking very strong and focused for his next step of World Domination at his weight in the Unified World Martial Arts Championships in Italy at the end of October.