This well organised Light Continuous Event was organised by Chass Wingrove and Lee Whittington, and sanctioned by ICO. Each section being fought through from start to finish before the next category went on.

Seasoned Junior fighter Jamie Brown was in the Boys 12 & Under (45KG +) Category. Jamie convincingly won his first fight but was unlucky in the final.

Rob Kenly was in the Youth 13 – 17 yrs (Under 55Kgs) and was matched against Tylor Pearson from TKO. We felt Robert though fighting on his back foot was accurate and sharp and dominated each round. We were confused at this decision which saw Tylor’s hand been raised. His brother George was also in the Youths 13 – 17 (Under 60Kgs), and lost to Daniel Easton.

In the Men’s Seniors Lukasz Gromadzinski ringcraft skills and timing was commented on by chief referee Pete Dunnett as he won three fights taking him into the final with Ashley Hook(Paul Wiffen). This was a close fight between two experienced technicians with Lucasz winning and being crowned the Ringmasters Champion 2013 Male Under 75Kgs. 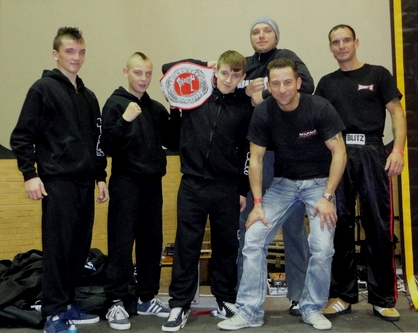 Tomas Kovaricek and Mark Mantell were both in the Male Under 70Kg Section. Tomas beat Leight Troubridge (Tko)to get through to the next round. Mark Mantell entered the ring for his bout but his opponent failed to turn up. The next bout saw both fighters out of the tournament.  One was knocked out with a head kick, and the other was disqualified for the head kick! This saw Tomas and Mark in the final together so moved around as a demonstration bout and share the title ofRingmasters Under 70Kg Champion 2013.