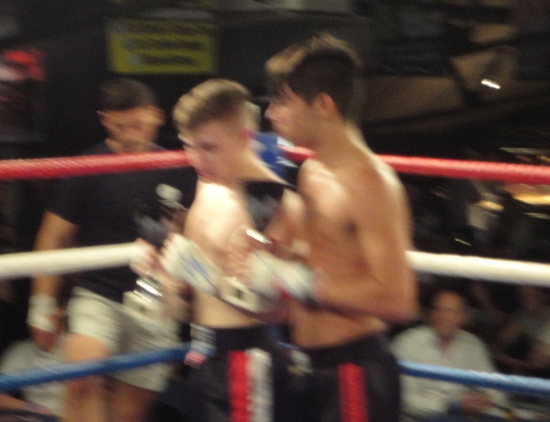 After his brother George’s win at the ICO European Open Championships the previous week, Seasoned Light Continuous Kicks fighter Robert Kenly (17yrs) was all fired up for his first evening show and debut full contact fight. This was a night of amateur and professional Kickboxing and K1 fights.  This fight was a Junior Eliminator Bout for a British Junior Title in August. Robert was fighting Marley Mason from the well schooled G Force Gym. Marley is known on the circuit for his aggression and powerful hands so we had worked on Robert’s stamina; ringcraft skills; fast hands and powerful kicks.

Robert had a superb first round dominating the ring and catching Marley clean with a push kick to the head and a perfectly timed spinning side kick. The second round was much closer with Marley pushing forward with punches, but Rob continuing to show superior kickboxing skills and catching him with some nice body kicks and punches off to the side. The third round clearly went to Marley for aggression factor and punches.  We had scored the fight 29 – 28 in our favour, but the split decision score gave the bout in favour to Marley Mason.  This looks to be a great re-match in the foreseeable future.