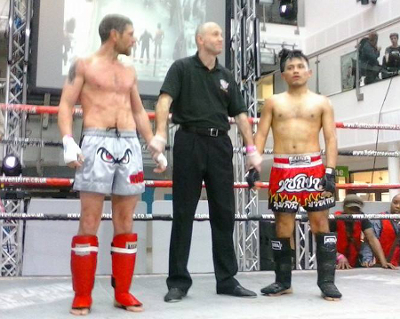 Promotions of Andy Chambers and Fighting Tigers Gym, and sanctioned by IKF. Great location at Sussex Coast Collegewhere the ring is in the foyer, and all the changing rooms are located in the tiers above, so great viewing angles.

This show was hosting Kickboxing, K1, Thai – Boxing, and White Collar Boxing Fights. Ron Tse was the first Thai Boxing Bout of the Evening over 5 x 1.5 Minute Rounds (C Class Rules). Ron was on against the far more experienced, taller, and local boy Elliott Hallworth (Fighting Tigers Gym) so we knew this would be a tough fight from the start. This was only Ron’s second Thai Rules fight and he showed great techniques and tenacity throughout this fight, and though the range of Elliott made him a tricky opponent Ron got stronger and better with each round. An accurate knee from Elliott in the fourth round which could have stopped a lot of people seemed to have the reverse effect on Ron who then stepped it up another gear, and produced his best rounds of the fight. 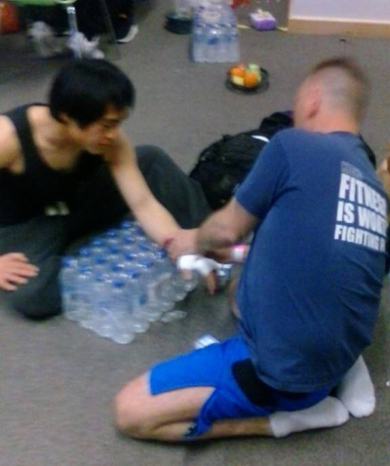 Justin Crump was up against Elvis Banjos from the well known Red Dragonz gym over 5 x 1.5 Rounds (C Class Rules). Justin was on great form, and controlled the ring and his opponent throughout this fight. He used his legs and knees to effect in clear Thai style defence and counter attack, and his hands connected with power and accuracy in every round. From our corner Justin looked the clear winner, and we were very puzzled when a split decision awarded it to Elvis. I have contacted the IKF and requested that this fight be reviewed such was the certainty held by our experienced Thai Boxing Instructor Marc Brown, Antony Hogbin,  and myself that Justin Crump won this bout.