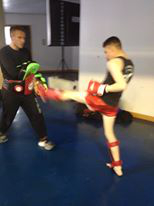 An early start for the Brown Family and Instructor Shane Kent which saw them leaving Brighton at 4am to get to Sheffield for the Weigh In for this Open Competition hosting a range of disciplines through the large area covered.

In Jamie’s Category of 13-14 Year Olds Under 58Kgs K1 Rules there was only himself and one other entrant so Jamie was straight through to the final over 3 x 1 Minute Rounds against Adel from Assassin’s Gym.
Jamie got kneed in the groin early on in the first round, and was unable to fully recover from this until the third round.  He fought very well against an experienced opponent, but lost the decision.  The first three competitors in any category at this event automatically qualify to attend the World Open Championships in Spain in November, so well done to Jamie.