This was a great evening which saw Kicks Fighters Tanith Colburn getting into the ring for her debut Full Contact Fight, and Ron Tse fighting his Second Fight under K1 Rules. Both fighters had trained very hard for this, and were fit and focused.

Tanith Colburn was against Nimh Waring (Assassins Gym) fighting over 3 x 2 Minute Rounds at 61kgs. A long term student with Kicks Tanith had brought along a Enthusiastic and Excited Crowd of Kicks Supporters which makes such a difference for the fighter going into the ring. This was a great fight with both women giving it 100%. Tanith successfully closed the distance between her and her taller opponent through out the fight, and though she is a very skilful and powerful kicker spent more time staying in close and working her hands. We saw the trademark jumping punch, and when using her strong push kicks these had effect. A great first fight and first win against a very worthy opponent, and even more special for Tanith as it was her Birthday! 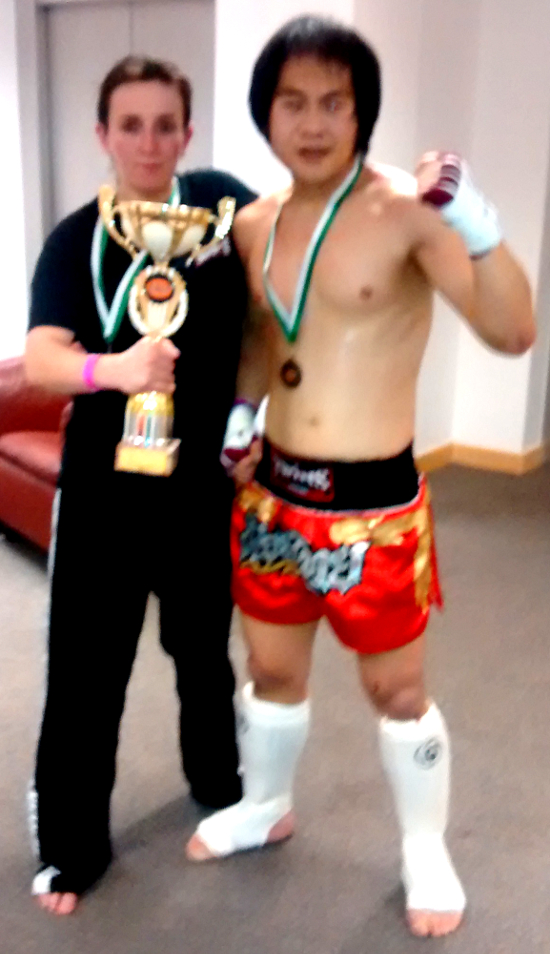 Ron Tse was against Sam Squires (Fighting Tigers) over 3 X 2 Minute Rounds K1 Rules. Sam Squires as the hometown boy came out very strong in that first round, and it showed Ron’s durability, fitness, and steel jaw that he withstood this sustained attack. The second round saw Sam tiring and Ron’s superior fitness coming into play as he caught his opponent with very strong straight shots and also used the knee to better effect. The third round saw Ron in his element pushing forward and his opponent very tired. A very clear last round to Ron, and a very exciting fight to watch as it went from a very strong start from Sam to a very strong finish from Ron. Ron lost this fight on a split decision which we had no argument with, and straight away Ron was keen to arrange a rematch, and probably would have had it on the night if he’d had his way! This is a fight that looks likely to happen further down the line in 2016, and will be one to look out for.