Junior Kicks Students Danielle Boniface and Jamie Brown; with Instructor Simon Hearnden were 3 of 500 Competitors at this well run competition in Dagenham.

All the Kata categories were scored on points in one round; with the top 4 competitors being placed in each category. This was Jamie’s first major competition and though he performed Pinan Sandan very well, the large section of his category meant his score wasn’t good enough to make the top 4. Danielle performed a very strong Bassai and was unfortunate in not making the top 4 of her section. Simon secured 3rd Place in his section with a strong Gojushiho Sho.

In the Kumite Jamie was drawn against an opponent 5 years older and with four years competition experience. Though his opponent won, Jamie defended himself well and tried hard at all times to get a score in. Simon was the only senior competitor for KICKS, and had entered himself for two Kumite Categories. The first was the Male Open Any Grade (over 16) and Simon won two fights taking him into the semi – final where he was awarded 3rd Place. His second category was Male Veteran. Due to an injury suffered in the previous category Simon was unable to continue in this category and was forced to retire. In spite of this he still managed to secure another 3rd Place.

All in all a well run competition at an excellent venue. 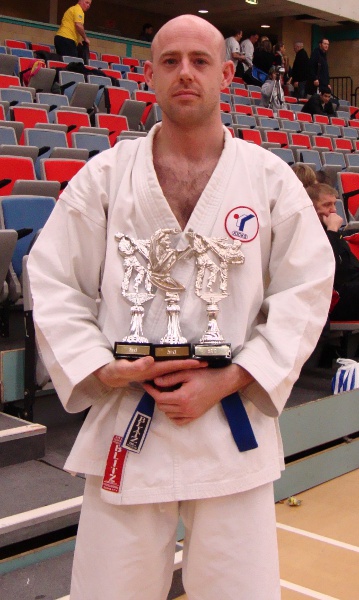