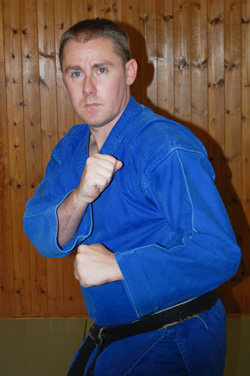 Paul Hollis initially trained in nin-jitsu, ju-jitsu, and kung fu. He started training in Wado Ryu under the Instruction of Chief Sensai Chris Kent and Sensai Alan Gibson back in the 1980s. He  also trained with other senior Kicks Instructors Keith Collier, Terry Robins and Steve Cosier as well as training with Sensei Vic Cook in Judo.
Paul Hollis is 4th Dan. He was awarded this in March 2017 for his 20 year services to Karate having achieving his first Dan in 1997. His second Dan was in March 2001, and his 3rd Dan in June 2004.

Paul started assisting in initially Junior, then Senior Classes under Sensai Steve Cosier. He attended Kicks Instructor Couses and was assessed through EKF certified assessor Sensai Terry Robbins. He has been teaching at Kicks since 2000, and has a growing number of Black Belts under his instruction.