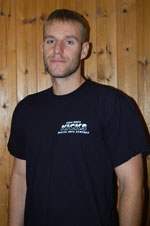 Shane Kent started training in Wado Ryu Karate in 1987 as a 5 year old, and achieved his Brown Belt before deciding he preferred kickboxing. He has always been instructed by his dad, chief instructor Chris Kent (7th Degree). He was the first junior to gain his Kickboxing Black Belt in 1997.  He achieved his Second Degree in 2001. As a martial artist Shane is the complete package; skilled in ring craft he is a very powerful and flexible kicker, and a very fast and elusive boxer.  Not only does he has all the ring craft of over two decades of training, he has also spent all these years watching, absorbing and analyzing the skills of elite boxers, kick boxers and K1 fighters.

In his late teens Shane also went and trained under Seaford ABC.  Shane was very keen to compete on the amateur boxing circuit, but on the five occasions he was matched his opponents pulled out. This was either before the day, on the day, and on the last occasion which was a Sussex v Kent Team event, after the weigh in and after both teams had entered the ring. Shane returned to full time kickboxing, and in the past has competed on the Semi Contact Circuit.

Though we’d all like him to get in the full contact ring Shane is content to focus on coaching all levels of students, and takes a keen interest in furthering the skills and fitness of Kicks Fighters. Shane has well established classes at St Bede’s School. He takes a popular Thursday and Sunday Morning Circuit Class at Kicks, and also is a cover Instructor for Classes in Brighton and Eastbourne. He teaches students on a 1:1 Basis, and is always happy to take on further clients.