For those who are new to Jiu – Jitsu this traditional Martial Art was used by the Samurai Warriors in feudal Japan and is considered to be the Grand-father of Karate, Aikido and Judo.  Jiu – Jitsu is made up of a series of different throws, joint locks, strikes and break falls.  Techniques learned from Jiu – Jitsu can work to your advantage whatever the situation, strength, size and of sex of your opponent. 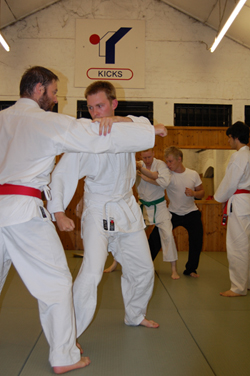 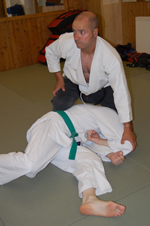 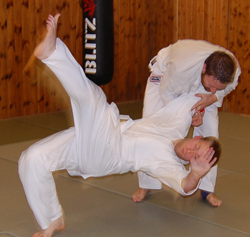 This traditional Art helps to build, develop and discipline your body. It will improve your overall strength, flexibility, posture and co-ordination. Through Jiu – Jitsu training your senses will sharpen, and you will gain a better awareness of your surroundings as well as becoming more focused and disciplined in every day life.  Although Jiu – Jitsu is traditional, it fits in perfectly with modern day life and provides excellent training for dealing with self defence situations that can arise.

Training in Jiu – Jitsu at Kicks means you’re in experienced hands. Kicks introduced Jiu – Jitsu into its curriculum in 2006 when Sensei Pat Heaney (5th Dan) became part of the Kicks Martial Arts Team.  Sensei Heaney has been instructing since 1992 and starting training in Jiu- Jitsu in 1985.  Prior to this, his background and training was in Wadu Ryu Karate.  He studied initially with Sensei Steve Dodd and was graded from Novice to Yellow by Professor Morris.

In 1986 he started studying Goshin Jiu – Jitsu with Sensei John Meek who took him from Novice to Dan Grade.  Throughout his years of training Sensei Heaney has continued to further his knowledge through courses with Professor Morris and Professor Clark, as well as other Jiu – Jitsu Instructors.

All students at Kicks work through the Old Style Jiu Jitsu Syllabus. Sensei Heaney take students through Jiu Jitsu techniques and oversees the class as a whole; and higher grade students will work with lower grade students to take them through basics such as Mat Etiquette; Break Falls; and standard strikes and blocks.