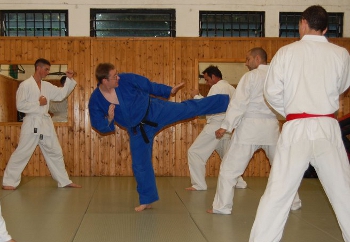 The full name of the style of Karate we teach at Kicks is Wado-Ryu Karate-Do. The term Wado-Ryu means “way of peace” or “way of harmony”, indicating Ohtsuka Sensei’s original intention to use training in Wado-Ryu as a means of solving problems in a non-violent way. Karate-Do means “way of the empty hand”, as Karate is, for the most part, studied without the use of weapons.

When you learn Wado – Ryu Karate at Kicks you are in good hands.  Sensei Chris Kent has been teaching Wado Ryu Karate at these premises since 1982.  Whilst Chris focused his energies into training and coaching in Kickboxing, his fellow Instructors focused on the development of the Karate within our club. His dedication and skill is reflected both in his own personal development, and in the achievements of our club students. Students training were part of the English National Karate Team and the English Wado Team. Elite national and international champions such as Wayne Ashton, Lee Chittenden, Mark Freeman, Paul Simmons, Paul Ellis, Steven Spicer and Sarah Ovendon. 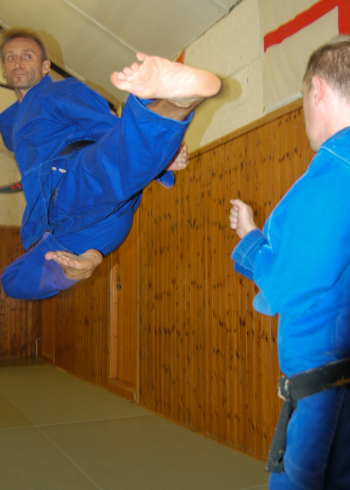 For many years under our old name we were part of Shikon and Chris got his 4th Dan (1991) and 5th Dan (1997) under Steve Rowe, the founder of Shikon. When Chris formed his own association KMAC in 2001 he started training under Tatsuo Suzuki. Kicks Karate was fortunate to have Tatsuo down for courses and regular training sessions. In 2003 Chris Kent was part of a training trip for Master Tatsuo Suzuki’s 75th Birthday in Japan. The highlight of the trip for Chris was being selected with former student Paul Simmons, and other non Japanese students, to demonstrate at Master Suzuki’s celebrations in Tokyo on 27th September 2003.  This was a great honour to demonstrate in front of Suzuki Sensei who is the most senior student to the founder of Wado – Ryu Karate Hironori Obtsuka. In this year Chris was also proud to see Sab Suharta his first non sighted student achieve her Black Belt.  In March of 2004 Chris was awarded his 6th Dan for his services to Wado Ryu by Billy Brennan and Mick Blackwell.  In Nov  2017 Chris was awared his 7th Degree thought the EKF. 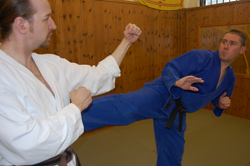 In the early 1990s Chris produced both “The Beginner’s Guide to Basic Karate & Self Defence” and “The Chris Kent Kickboxing Course.”. In 2004 Chris brought out “Kihon Basic Techniques” on DVD. His intention is to bring out Wado Ryu Katas in 2010.

Kicks are proud of its karate achievements over the years. Chief Instructor Chris Kent sits in on the Grading Panel, is available for one to one sessions, and teaches our Black Belt Students and Instructors. 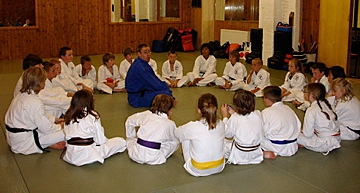 Sensei Paul Hollis (4th Dan) is our very popular main Karate Instructor in Brighton and teaches both the adult and junior classes,  and one to one sessions. We also have Sensei Craig Waller (5th Dan) who assists in Brighton, and is available to teach at external venues for courses etc.  We also have Sensei Tony Kenneally (3rd Dan) who though he no longer runs his own clubs happily steps in to cover at Brighton classes when needed.