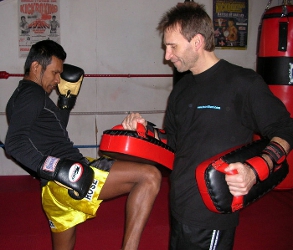 This had a steady number of students but we wanted to offer more. We were delighted when in September 2009 we had the opportunity to have Mr Bunrot Phiophong (Rose), from Tiger Muay Thai Gym, Phuket over instructing at our club for three months.  Rose started training at the age of 8 and trained under Kru Nokeweed Davi (K1 & Lumpinee Champion) and then Jaruntong Kiatbanchong (Lumpinee & Rachadamnoen Champion). His fight record was 163 fights which included 5 fights at Lumpinee; 12 fights at Rachadamoen; and six fights televised on TV Channel 7   Rose brought boundless patience and humour into the daytime and evening classes then on offer,  and everyone benefited and learnt a lot from his being at Kicks.  From January 2010 – July 2011 Kicks Instructor was Jono Redden who had over 15 years experience in the Martial Arts, and lived and fought in Thailand between 2001 – 2003 fighting in Gawilla Stadium, Chiang Mai and in Ratchadamnern Stadium. 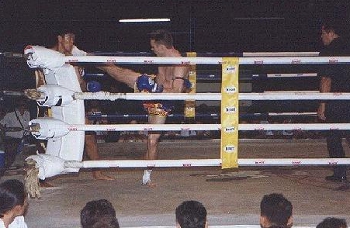 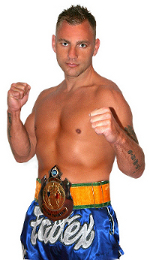 From August 2011 we were fortunate to gain Marc Brown as an Instructor through Crawley Martial Arts Academy.

Marc  started Martial Arts as a junior, and has a wealth of instructional experience as well as over 100 fights under his belt (29 of these fights in Thailand). He has also spent extensive periods of time living in Thailand and training and fighting out of Fairtex Gym, and has the honour and recognition of having fought at Lumpini Stadium, Bangkok.

Marc had to leave Kicks for work reasons in 2015, and in the interim we were very fortunate to have two excellent Thai Instructors. We were very well schooled with Super Kim (Prakim KhanThong) from 2015 – 2017, and then very fortunate to have our friend and world class Instructor Kru Chao teaching at Kicks from 2017 – 2019 . Chao started Thai Boxing at age 8 and had over 350 fights under his belt before he retired and took his skills into teaching both in Thailand and Internationally.  Among others he was trainer to Fighter Yodsanklai whilst at Fairtex Gym.   Kru Chao had to return to Thailand in 2020 and is back teaching at Fairtex Pattaya. We hope he will be back for a visit at some point in the not too distant future.

We are fortunate however that 2020 saw Marc in a different job and we are delighted he is back teaching with us along with our Excellent Kicks Fighter and Champion Jamie Brown.